The Geekvape Aegis Solo 2 Kit or S100 Kit is the follow-up to the Geekvape Aegis Solo Kit which also featured 100 watts of power.  Design-wise , the unit is distinguished by having the same appearance as its forerunner, which is evident by its gorgeous materials and decorative lines. In addition to grey, silver, black, navy blue, red, and rainbow, available colors also provided are red, navy, silver, grey, and black. However, the new device is similar to those that came before it in a few other ways, as well.   For example, the Solo 2 is waterproof, dustproof, and shock resilient due to an IP68 waterproof rating, just like the rest of the Aegis lineup.  And, these protections are even superior since this is a second-generation product. And, by incorporating leather and manufactured alloys, the tri-proof configuration is smaller and preserves its tactile characteristics.

One 18650 battery powers the unit to produce approximately 100 watts of output. Although you can charge the cell via a Type-C port at the upper side, the battery is also attainable through a handy screw cap at the bottom. This connector is not only waterproof, but it has a flip cap for quicker charging. Additionally, the plug-opening procedure on the USB port has been simplified for people who didn’t like the charging shield on the GeekVape Aegis Legend.

The S100 mod’s slider switch, located on the side of the box mod can help stop a malfunction during inactivity. With this in place, accidental firing will be much less of a risk, and the coils will be much less likely to burn out or cause dangerous situations. This indicates you may invariably feel comfortable bringing it with you wherever you go, even in your bag or one of your pockets.

To also enjoy a sharper view of vaping data or to change the settings, the 1.8″ display of the Aegis Solo 2 is significantly bigger than the one found on previous devices. The UI also features a very pleasant  look and incorporates data such as mode, battery level, wattage, resistance, amperage, voltage, and more.

The kit for the Geekvape Aegis Solo 2 includes the Zeus tank, also known as the Z Tank.   Vapor production and flavor are bolstered by the inclusion of a top-to-bottom air intake design. This is done in order to keep the tank leakproof.

The Z series coils of the S100 Kit are made with the finest kanthal material, which provides a better vape experience and long-term durability. The tank includes the Kanthal A1 0.4ohm, rated for 50 to 60 watts, and a 0.2ohm coil, both of which are designed to work with up to 80 watts of power.

£23.39
Added to wishlistRemoved from wishlist 87

£35.99
Added to wishlistRemoved from wishlist 87 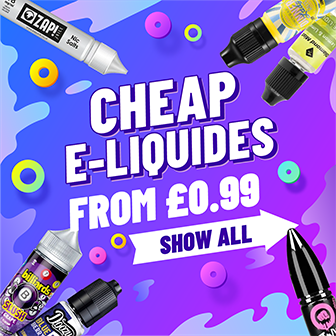 UK Vape Shop Deals is your premier web source for the best UK vape deals and coupons. Each and every day, we surf the world wide web for the best vape and ecig promotions from United Kingdom vape retailers to find the best prices on mods, kits, pod systems, vape juices, and atomizers. And, we only work with reputable websites, so you know you'll never get ripped off.